For once in my life, I stumbled into a conversation in a bar, where I was actually something of an expert.   Not anything really important mind, or even particularly intellectual but nevertheless on the subject of watching British TV over the internet – I do have many years of experience!

It started in about 2007 when I was sent travelling around the world working on an upgrade of a popular Desktop operating system in a very big multinational.   Although the locations I visited sounded exciting, the reality was that I arrived (usually in the dark) spent some hours in a server room before then retiring to some boring business hotel before flying home.  No time or energy for sight-seeing, or expenses either, just a lot of time sitting in airports and hotel rooms.  One of the main issues was boredom, especially as most of the hotels didn’t really have many English-speaking channels on their satellite systems.  It was in one of these hotel rooms that my quest to watch British TV on my laptop began and I’ve been researching it ever since.

Now back to my bar room discussion which involved a few British expats and a few Americans.  The discussion was – how to watch the BBC from the US without having to use some overpriced cable package.     Several of the people in the circle had achieved this, however the method they used was quite unusual and surprisingly they were all doing the same.

Here’s what they were doing.  Each of the BBC fans had found a service which operated private dedicated proxies based in the UK which you could rent for about 30$ a month.  They then bounced their internet connection through their respective proxies and therefore where able to hide their location and watch the BBC.  Now normally if you try and watch the BBC iPlayer from the USA, you’ll just get blocked.   So, this method was perfectly valid as instead of seeing your true location it would see only the IP address of the proxy server.  As this was in the UK, all British TV channels worked fine and there was no issue.

So, what was my problem? Well mainly the fact that all these people had their very own, private dedicated proxy server just to watch the BBC on.  It’s overkill, it’s not needed and even worse it’s much more expensive than it needs to be.   The reality was that as per usual someone had found a web site explaining that in order to watch the BBC you had to have an individual, dedicated IP address in order to watch.   This is completely untrue.

Anyone who has worked in a large IT department will probably have come across some web monitoring software.  It’s used to find out how bloody lazy the employees are and how much time they waste on stupid social networking sites when they’re supposed to be working.  If you have seen this, you’ll also know that in the UK one of the most popular sites is the BBC and the BBC iPlayer.  Huge networks are routinely brought to a crawl by thousands of people watching the BBC at work.   However, for our illustration the important factor to remember is that most of these people access the BBC from a single IP address – their corporate proxy.

In offices around the UK, most individual computers are routed through some sort of gateway to the internet. This means that all these people will usually access their websites from the same IP address – that of the gateway computer (often a simple proxy).  Which means that there’s no way that the BBC will ever start to filter and restrict access to individual IP addresses.  If they did literally millions of people would be cut off from watching the news from their office or catching up with the latest episode of Bargain Hunt when everyone’s started to doze off in the evening.

However, my new friends had decided that you needed your own individual UK IP address dedicated for their own use in order to access the BBC online.  Well, let me state quite categorically this isn’t true.

You Definitely Don’t Need a Dedicated IP for BBC iPlayer

It’s simply not practical, literally millions of people share IP addresses all the time.  For example, if you had to have a dedicated IP address then only one person in a house or flat could access the BBC online at the same time.  That’s clearly not the case and why it’s unlikely the BBC would ever make such a filter or block active.

This is actually good news for my friends because it meant they could cut their costs substantially in watching the wonderful BBC.   All you need is a VPN/proxy service which has an endpoint server based in the UK.  You will occasionally see reports of the BBC iPlayer VPN not working however it isn’t through blocking anyone who isn’t on their own reserved IP address. That means that loads of inexpensive security services would work perfectly as they keep the costs down by sharing IP addresses between users – although the data is still protected by encryption.   Sure, there are lots of concurrent connections from the same addresses, but that’s perfectly normal behaviour anyway.  It should be noted though that it’s still wise not to overdo it.  If you have tens of thousands of concurrent connections all streaming from the same IP address, then that might raise a few red flags in the BBC server rooms.

So, investing in a service to watch the BBC from outside the UK is without doubt a great investment.  The BBC online site has gone from strength to strength and is packed full of incredible programmes in all sorts of areas.  What’s more one of these VPNs opens up all the other UK TV stations as well including the ITV Player which has also really improved over the last few years.

Both your support by clicking the links below or any of your questions are both very welcome. 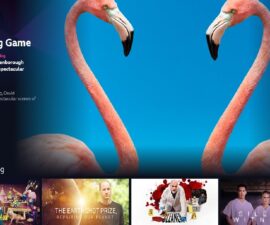